Last week I was lucky enough to present the keynote at Oracle Modern Business conference in London. I used it to test some thinking that’s emerged from client work over the last few years. I’ve been gathering data around it and applying the ideas in real businesses… needless to say that there’s some promise there.

The central thought is that dinosaurs were once unicorns. Rather than the common rhetoric that the latter are intrinsically better than the former, I wonder whether unicorns should actually aspire to be dinosaurs and seek to learn from them in the same way that big organisations seem desperate to sip some unicorn-flavour Koolaid in the Valley. Anyhow, here’s the transcript of my speech. Hope you find it interesting.

Disruption was an exciting new concept when I started my career. It was much like Lean Startup is today: if you felt that you understood it, you were in an exclusive club possessing of knowledge that could topple empires.
Disruption is daring, a tale of David and Goliath in which an innovation creates a new market and value network, destroying the existing market and value network, displacing established market leading firms, products and alliances, typically with terminal results for those incumbents.
Those incumbents are the dinosaurs, great lumbering beasts just waiting for the asteroid.
Today we’d see a business that disrupts really well as a unicorn: a mythical value creature that investors scramble over to get a piece of. Unicorns are faster and leaner than dinosaurs. Their culture of flatness and risk taking makes them deadly competitors, even if they only have one horn.
I’ve long believed that there is truth in this, that the cultural norms of the Digital Economy are more effective than the management norms of the Industrial Economy, which are based on hierarchy and control. So I set out to prove this in a two year study with London Business School. 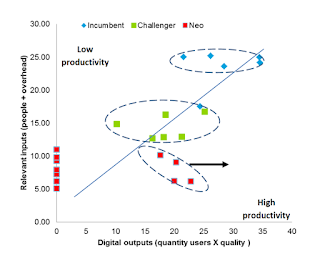 Our research used the banking sector – incumbents, challengers and potential disruptors – as a base. It wasn’t conclusive, but it does suggest mathematically that digital native businesses are substantially more productive than incumbents.
The question is whether being more productive is enough. Many people seem convinced. The common rhetoric I encounter in our own organisation is that the rate of change is accelerating, unicorns will triumph and we are entering a post-dinosaur world.
As with everything these days, there are facts and there are alternative facts. I have come to believe that the common rhetoric is a lazy rhetoric. My research suggests that unicorns and dinosaurs will largely peacefully co-exist and that both have much to learn from each other.
Let’s talk about the life of dinosaurs. As we learnt in school, these are majestic beasts with huge teeth and claws. None of my friends were interested in the little guys, so we’ll continue with that bias today.
Companies have been around since the 16th Century, but their ascendancy in economic terms began with the widespread growth of public companies in the late 19th Century. It’s not actually all that easy to get data on these early organisations. Much of it is buried in ledgers in public libraries or in books with gripping titles like ‘Scale and Scope, the dynamics of industrial capitalism’.
But if you’re persistent then you can find it and with it a treasure trove of information about the way in which both unicorns and dinosaurs evolve. 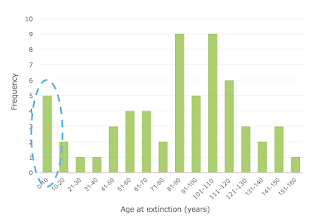 The figure above is a distribution that shows the age of large organisations at the point that they went extinct. By extinct I mean bankrupt, dissolved, eaten by a competitor or deceased in some other way. And these are important institutions – all of were part of the Dow Jones Industrial Average or were members of the S&P 500 or FTSE 100 from the 1880’s to the present day. Importantly, this is a data set that covers the last economic system change: electrification.
Looking at the peaks tells you something interesting about the points of danger in an organisation’s life. And the first danger is in their unicorn-dom.
The data suggests that large organisations are about 35% more likely to fail in their first 10 years than the average. To put that into perspective, at the time of writing there are 185 Unicorns – privately funded companies with a valuation of more than a billion dollars. 75% of them are less than ten years old. 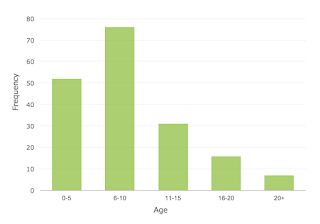 So what’s causing this spike in the death rate? It’s important to recognise when considering the death of unicorns that dinosaurs were also once unicorns. Although a very small number of organisations gradually build over time into mega-corporations, the vast majority of big businesses started out causing or riding a wave. They grew explosively fast by creating new industries like automobiles, aeroplanes, electrical factory equipment, typewriters, software and so on.
That rush is a really dangerous period. Yes, it’s exciting, but in a rush to grab newly emerging demand those that fail over-invest in areas that do not build lasting competitive advantage and as their market inevitably begins to slow they are left with a cost base too great to be sustainable. In the old days we’d have said that they were too ambitious. Post lean-startup we’d probably say that they’d failed to validate whether they could make money as they scaled.
Let’s go back to the chart. 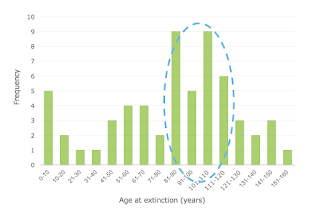 There’s two big spikes in the middle, between 80-90 and 100-110. Companies at this age are in real peril – 140% more likely to go extinct than the average. The ‘why’ is two-fold and strongly related to the time period covered by the data.
That time period covers the Industrial Economy and about ten years of the early Digital Economy, in which the introduction of digital computing as a new general purpose technology led to another surge in innovation output.
What you’re looking at here is the gradual decline of Industrial Economy business models over a long cycle. When you look in detail you see that the demise of these dinosaurs was generally a legacy of doubling down on non-differentiating infrastructure by Managers who’d grown up on the scale economics of the preceding hundred years.
It’s important to realise that this generally isn’t an asteroid. Disruption is a small part of the story, but by no means all of it. The economist Paul Ormerod has done fascinating work on the effect of disruptive shocks on businesses. This chart shows one of his many analyses, demonstrating that throughout history shocks have led to extinction, whether there is disruptive change or not. 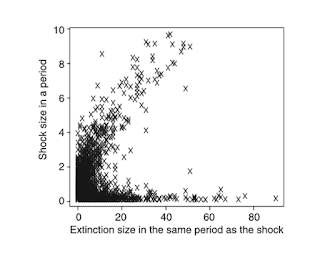 Doubling down on an existing strategy at a time when the world is changing is much the same as the failure mode of unicorns.
It turns out that it’s not at all easy to innovate and grow fast. And it’s not easy to change tack and change modes into optimisation. Survival is a process of building layers of complementary physical and intangible infrastructure that maintains the efficiency of scale while providing a springboard for investigating possible future infrastructure layers.
There’s a way of thinking about it that I’ve found effective with the businesses I work with. It’s not a silver bullet, but it is a useful framework for transforming the way they think about their market and their operations. 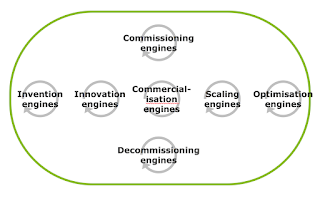 This model entails rethinking the organisation as an interconnected set of engines, each managed by different metrics and with distinctly different functions. These are not unitary structures – organisations can have many of each and crucially they partner for many more.
Let’s start from the top.
Commissioning engines are the quarterback for the system. They maintain a world view that enables everyone in an organisation to go broadly in the same direction and trigger migration from one type of engine to another based on, amongst other things, the growth rate of their key metrics.
Invention engines come up with new ideas and technology in isolation of application. These are often pure research organisations and thus are more than likely to be outside the direct control of your business.
Innovation engines systematically take ideas from invention engines and apply them to business problems dictated by commissioning. They demonstrate problem solution fit and then pass to…
Commercialisation engines, which operate a lean startup process of build, measure, learn cycles that establishes product-market fit for an innovation, be that a process change or a new venture.
Scaling engines begin the process of migrating a startup venture onto a more sustainable footing. They balance growth rate with putting in place infrastructure – remember that means working practice as well as physical and tangible – that will work at 10X size.
As growth begins to attenuate you need optimisation engines. 80% or more of the typical business’s resources are in optimisation engines, which are set up for slow or even negative top line growth and thus focused on systematising innovations that enable productivity to remain high.
Underpinning everything is a decommissioning engine. This doesn’t just sense when something is no longer performant and needs to be removed from the portfolio. It also triggers invention and innovation by detecting business problems that are emerging from operating. If you like, it looks inwards while the commissioning engine looks outwards.
This all sounds fairly hypothetical and even a recipe for chaos. It actually works really well operationally because it does two things. First it requires the use of data around every process in an organisation. Processes drive outcomes. Outcomes need to be meaningful in order to be pursued.
Secondly it disconnects outcomes from domains. The people, process and technology of an organisation should be directed at outcomes at a life stage, not consolidated by nominal domain.
Finally it focuses the mind on the engines that an organisation needs as it evolves rather than the engines that are making it successful right now.
In other words the future of business as I see it is a hybrid: the scale and solidity of a dinosaur and the magical growth powers of a unicorn.
I suppose we could call that a rhino.