he Attorney-General of the Federation and Minister of Justice, Abubakar Malami on Monday collapsed in Sokoto state.

Malami was in Sokoto for the inauguration of the reconstructed State High Court complex by Governor Aminu Tambuwal.

It was gathered that the minister collapsed after delivering his address at the ceremony and was quickly revived by his aides and dignitaries who helped him to stand.

He was subsequently hospitalised at a private facility upon his return to Abuja.

Malami however attended the weekly Federal Executive Council meeting on Wednesday but was returned to the hospital few hours later, a source said.

Known to be interested in taking a shot at 2023 presidency, SaharaReporters had in the past exposed how Malami acquired several properties whose value run into  billions of naira since he was appointed by the administration of President Muhammadu Buhari as Nigeria’s chief law officer.

For example, the AGF has an underground hotel in Sokoto, three houses at Peace Estate, Abuja, a brand new state-of-the-art school in Kebbi, two houses for his sons worth N100 million each and a new hotel under construction in the Jabi area of Abuja.

Malami also bought a house this year worth N150 million in the Gwarimpa area of Abuja.

The newly constructed school is located at the back of NITEL in Gesse Phase 1, Birnin Kebbi, while a new house worth N600 million on Ahmadu Bello Way, Nasarawa GRA, Kano, are among properties acquired by Malami since he became a minister under President Buhari.

The houses he built for his sons in Kebbi are 200 metres apart in a posh area in the city.

The facility is said to be an entertainment centre with a yet-to-be launched plaza, kids playing section and a hotel under construction, all in one place.

This is apart from Rayhaan Hotel located on Zaria Road, opposite Aminu Kano Teaching Hospital, which the AGF massively upgraded.

Related Topics:
Up Next

oscow has become the first city in the world to make vaccination against coronavirus compulsory not just for healthcare workers, but for employees in a range of public-facing industries, including catering, transport and museums.

Officials in the Russian capital published the order on Wednesday, citing concerns over the worsening local epidemiological situation. Describing the spread of Covid-19 as “unfavorable,” the city’s top sanitary doctor, Elena Andreeva, warned that “there is an increase in the number of people who actively visit public places while sick,” attending venues and using mass transit systems.

As a result, 60% of workers in selected businesses and organizations will be required to be immunized. Sectors singled out include transport, food and beverage businesses, banks, as well as those working in beauty salons, theaters, museums, fitness clubs, spas, and massage parlors.

In a statement issued at the same time, the mayor of Moscow, Sergey Sobyanin, said that officials had seen a “dramatic” worsening in the situation. “Ultimately, it’s up to everyone to get vaccinated or not,” he said. “You can protect yourself or hope that everything will work out… This is a personal matter… as long as you sit at home or in the country.”

“But when you go out into public places and come into contact with other people, willingly or unwillingly, you become an accomplice of the epidemiological process. This is the chain link for the spread of a dangerous virus,” the mayor said.

“Moreover, if you work in an organization that serves a large circle of people, then in a pandemic it is definitely not only your own business, no matter what personal protective equipment you use,” Sobyanin added.

Around 1 in 10 Muscovites are estimated to have had both shots of the vaccine so far, statistics say. However, skepticism and distrust are thought to have limited the number of people booking appointments, despite the widespread availability of vaccines.

Speaking last week, President Vladimir Putin sought to reassure Russians, saying “not a single serious case of complications” has occurred during the nationwide roll-out of the vaccine. “There is nothing to be afraid of here.”

However, the Kremlin sought to downplay suggestions that the move amounts to a policy of forced vaccination, with Putin’s spokesman, Dmitry Peskov, saying that compulsory immunization isn’t even a question to be considered. Instead, it appears that the rule change simply regulates how many unvaccinated employees can work in selected industries.

The move will raise questions over whether staff will be pressured into receiving a shot, and what can be considered mandatory vaccination. On Wednesday, the UK introduced compulsory vaccines for care home workers caring for old and vulnerable people. International Trade Secretary Liz Truss told reporters that “we need to make sure we get the balance right but I’m sure people appreciate that protecting lives is the absolute priority.”

Sobyanin introduced a curfew on Moscow’s nightlife this week and four days of paid holiday for workers in a bid to slow the spread of the virus. Cases have spiked across Russia, with the number of positive tests rising from a consistent plateau of around 8,000 each day to over 14,000 on Tuesday.

he Federal government has placed 14 countries on watch list as part of measures to prevent a possible spread of the new COVID-19 variant.

The Lagos State Commissioner for Health, Prof. Akin Abayomi, who made this known via his Twitter account on Wednesday, said the measure became necessary following the discovery of variants from banned countries within the country.

“Nigerians returning from lesser hajj would have to undergo a compulsory seven-day self-isolation.

“The state will not hesitate to prosecute anyone, irrespective of status, who fails to comply with the directive.

“The state has, however, developed a five-pillar strategy for curbing a potential third wave in Lagos.

“These include ensuring that all travelers carry out COVID-19 tests while we also introduce PCR tests to determine variants and mandatory seven-day quarantine,” he said.

he Rivers State Government has directed civil servants from grade level 1 to 13 who have been at home since January due to the second wave of COVID-19 to resume work from Thursday, April 29, 2021.

The directive was contained in a circular issued on Wednesday, April 28, by the Rivers State Head of Service, Rufus Godwin.

The circular directed all affected civil servants to strictly comply with all COVID-19 protocols by observing social distance and wearing face masks.

The Head of Service also directed all Permanent Secretaries and Heads of Extra Ministerial Offices to monitor and ensure compliance with the directive.

Rivers State Governor, Nyesom Wike had on January 20, 2021 ordered public workers from grade level 1 to 13 to work from home except those on essential duties. 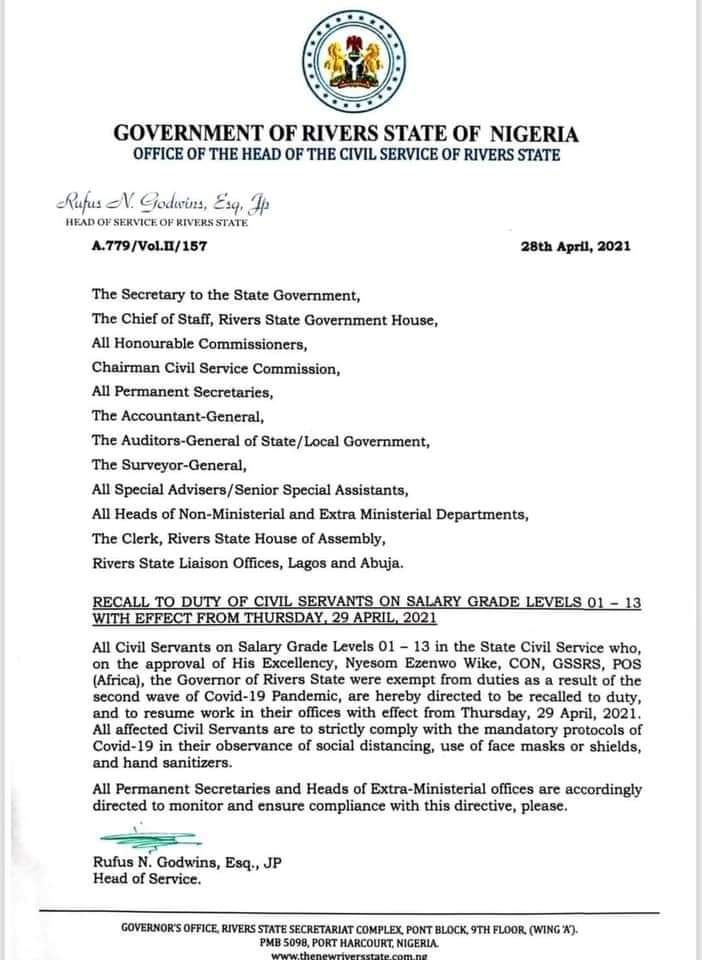